Disclaimer: WHQ doesn’t care how other foodies do it. We are not critics. We are simply food lovers who love to eat with all our senses and especially our hearts. We are not representing anyone. Halal is an act of individual’s responsibility. What we feast on may or may not fulfil your standard of 100% halal. We are not responsible for your own tummy and bodily experience. Our intention is to make Halal a no.1 brand in the world for the world …in our own unique way.
Country: Singapore
Date: June 2013
Time: 8.45pm
Guest Blogger: Malay, Muslim, Male, age range: 28-38yrs
Event: OUCH is a project where occasionally (and randomly) WHQ dines with a local blogger who is not afraid to voice out his/her true thoughts out loud.

Intention: To improve Halal food by understanding it from a different perspective.
Do read this article with a smile 🙂
“Dishes Ordered: Mushroom Soup, Teriyaki Chicken, Seared Chilean Salmon, $43 steak (I can’t even remember what it was), Pasta Aglio Olio & a Lava Cake (that never came)
A request was specifically made for any sauce served on the side for the dishes (except pasta); simple reason being if a piece of meat is shit or it’s prepared horrendously, the average Malay Muslim palate will be fooled into thinking it’s all good just by virtue of smearing vulgar amounts of sauce on it.
Mushroom soup: consistency was just a little too runny for my liking. Lacked creaminess and a rustic approach to the pureed  mushrooms would have given it the body it so badly needed. Seasoning was a 50% success rate – pepper used was alright but WHERE WAS THE SALT? Did you use it all up during Passover? Jesus Christ, man! 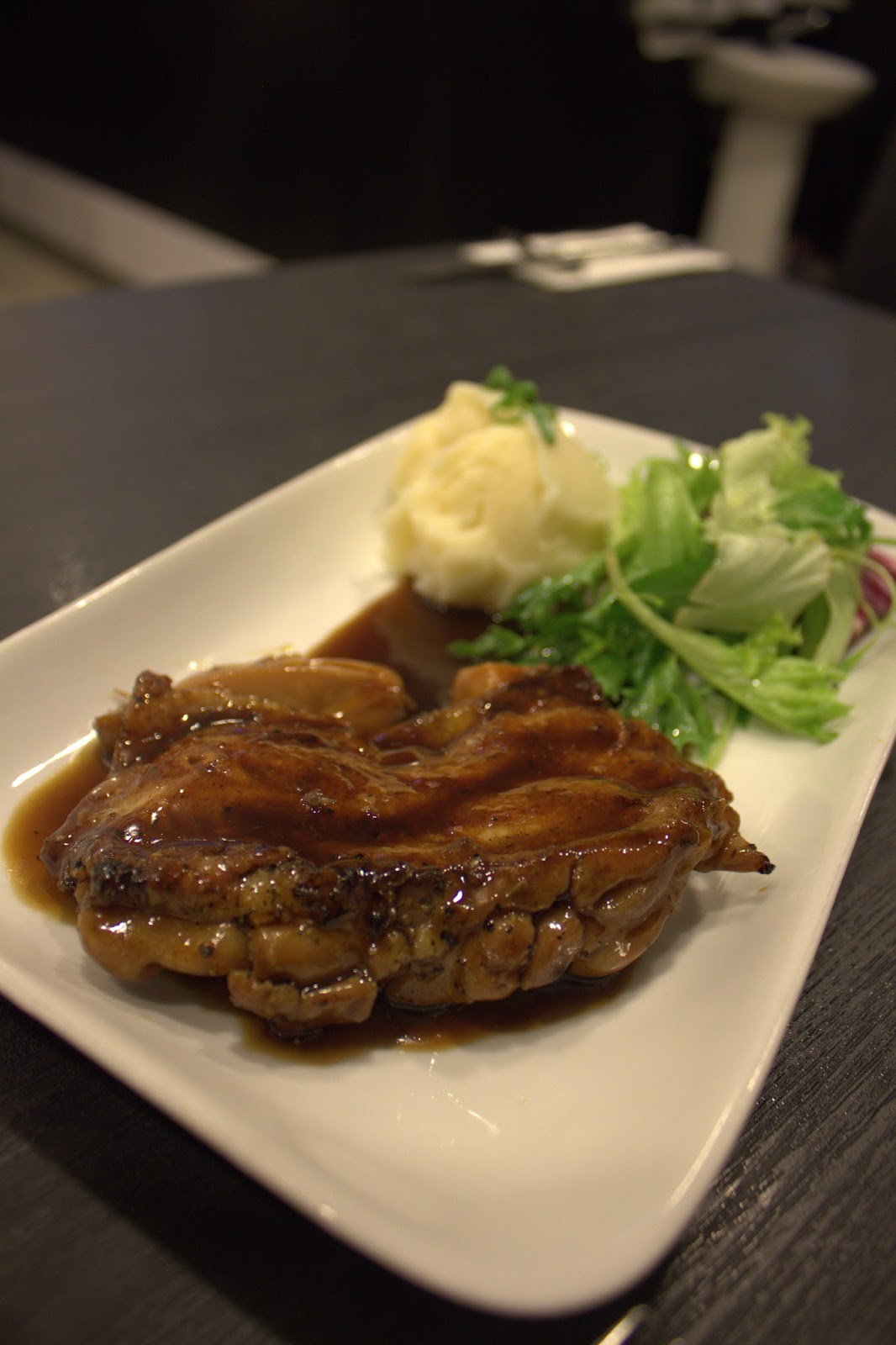 Teriyaki Chicken: Clearly my request was ignored for this, the chicken came slathered with generous amounts of teriyaki sauce to the point that all I tasted was teriyaki sauce. While the fillet was a reasonable size, it came with minimal grill char, which subtracted from the experience. Well played, chefs & cooks: You played the sauce card to hide the fact that the chicken was done to the standards that didn’t exceed the average western food stall in local coffee shops. A round of applause, guys.
Seared Chilean Salmon: You know how people say “less is more”? In a probably misguided attempt to provide value, I got served a generous chunk of Chilean Salmon which at first sight seemed pretty promising. And for the initial 3 bites, it delivered – seasoning was OK (again salt was an issue, just slightly lacking), fish was nicely browned on all sides. Then it got to the middle of the fish chunk – cold & uncooked. A seared salmon steak or fillet should be 3/4 cooked with just a slightly pink centre, no? This was not the case; the inside was so raw the fish was asking me “How are you?” in Spanish. The accompanying sauce – a disappointing, under-seasoned creamy tomato pulpy mess was served cold & provided an unwelcome juxtaposition to the fish. 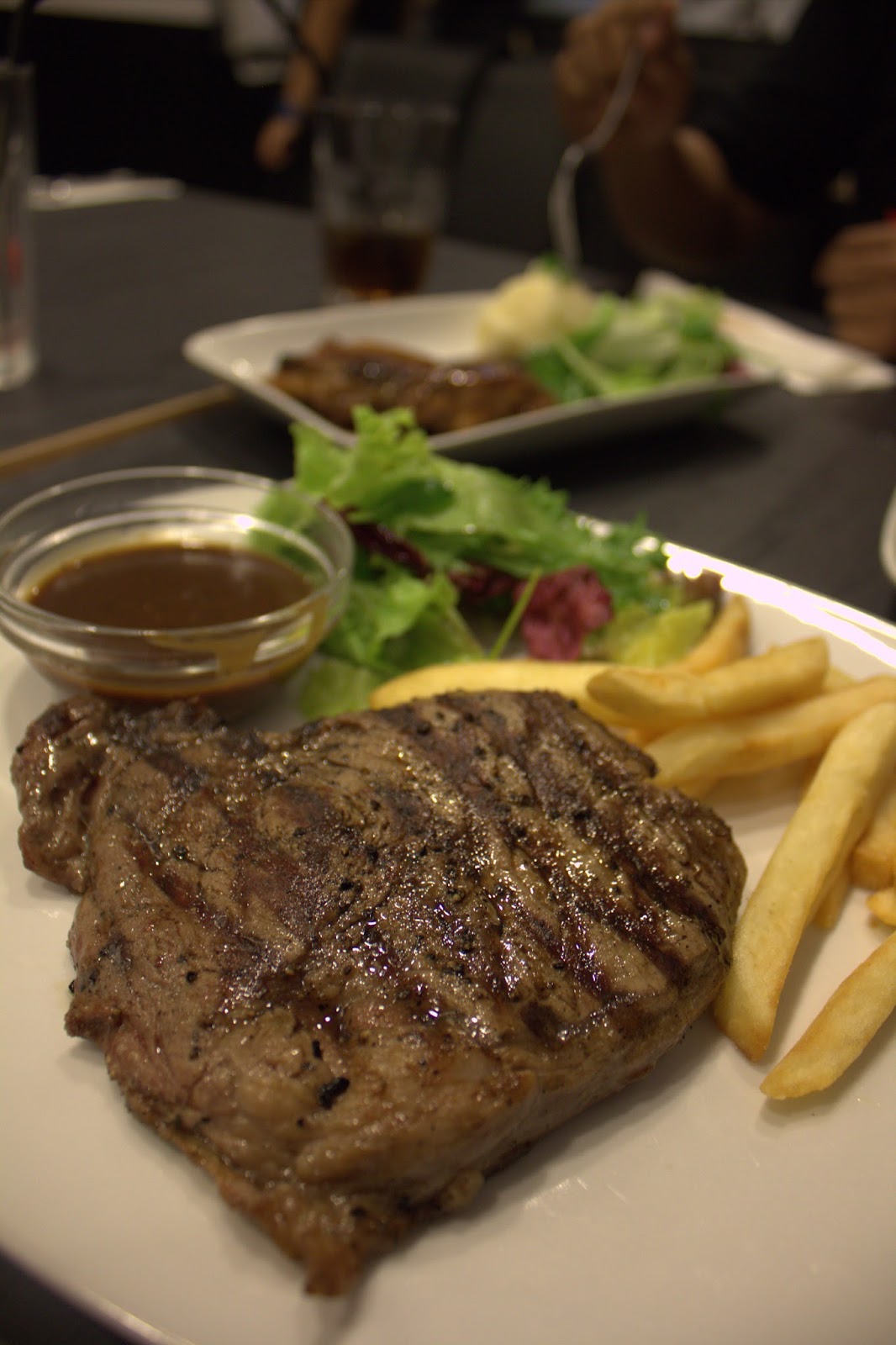 USDA Ribeye Steak: Sauce came on a side bowl as requested; congrats…congrats to myself for being smart enough to ask for that because apparently I found out where the salt that was missing from the earlier dishes went to – The STEAK SAUCE. There was enough salt in there for a Jewish company to mine it for Dead Sea mud. Steak was ok. Only Ok, nothing outstanding. Bare minimum requirements – it was edible & done medium rare. Where was the magic of a really good steak? 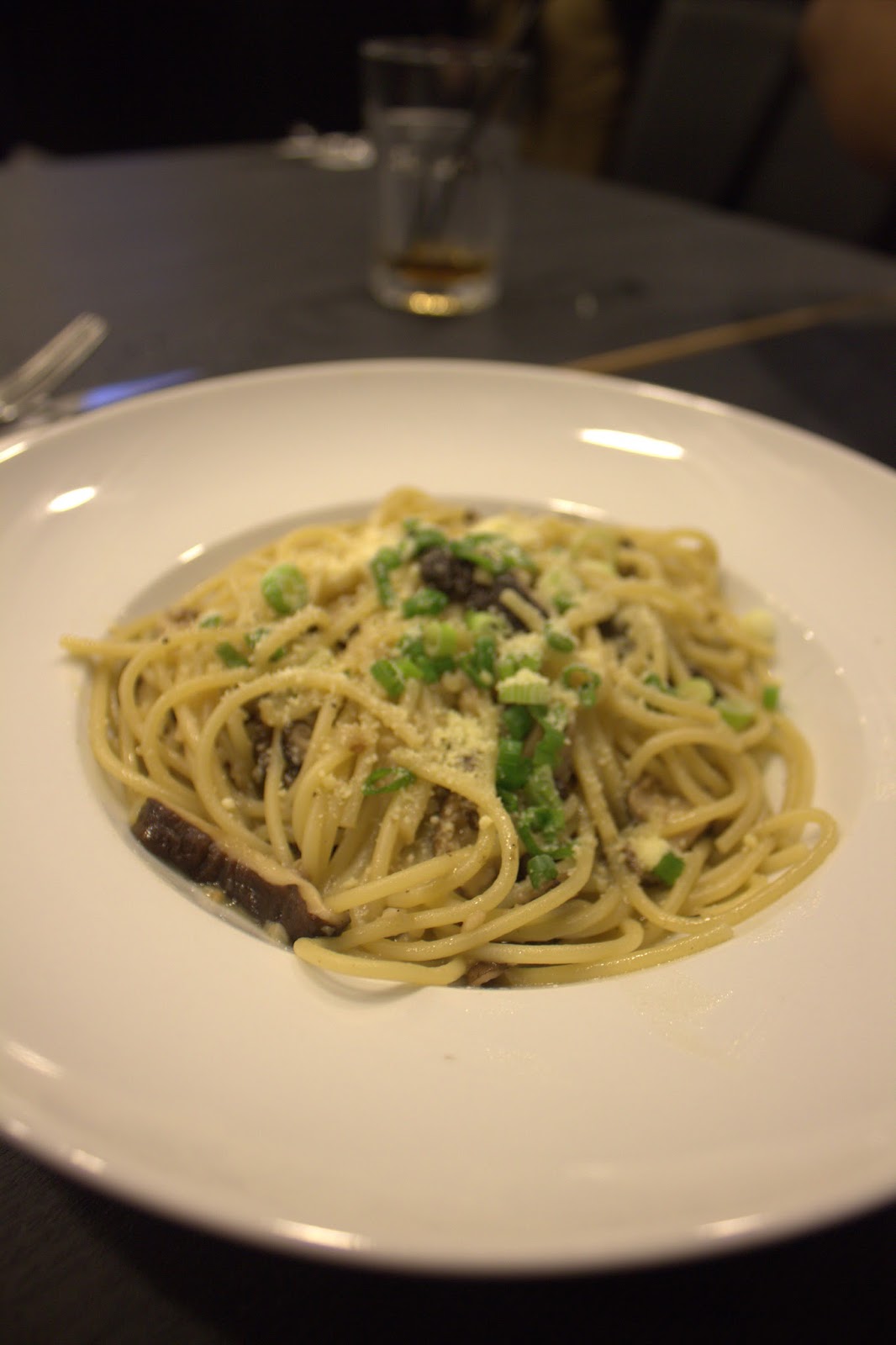 Spaghetti Aglio Olio:  This dish came ready with a generous sprinkling of parmesan cheese. WHY  WOULD YOU DO THAT FOR? The pasta dish design brief is simple enough: Spaghetti with garlic & olive oil. You wanna throw in a bit of chili for the “peperoncino” bit, that’s fine really. Any kind of add-ons after that; parmesan cheese or even Tabasco if you’re disgusting enough, is UP TO ME TO DECIDE IN THE AMOUNT THAT I WANT TO. And where in this simplest of simple food design briefs did the mushrooms come into play? I didn’t order a Spaghetti Aglio Olio al Funghi; far from enhancing the dish, the mushrooms added a disgusting brown tint and unwanted aftertaste to a dish that was meant to be crisp & clean & simple. Way to go, guys. Being too clever isn’t clever AT ALL.
Lava Cake: Placed an order for lava cake; lady manager said OK. After 15 minutes, still no sign of the cake. Asked the waitress, kitchen said they’re out of cake. Ok. So, no cake. No problem.
Service was alright; lady manager was nice & polite enough, although I’m not buying the excuse she gave about the fish being sashimi fish which was why it was cold in the middle. Lady, I know the kitchen guys gave you that excuse & asked you to come say that to the guest in question, points to you for being a team player but I could tell that even YOU DIDN’T BELIEVE IT. Waitress Farah is an asset to the joint, she was all smiles & ready to help despite the full house & the uppity crowd of middle/upper-middle class Malay families that filled the tables.
So well done I would say to Chef & friends/backers/investors/hangers-on: Location-wise they nailed it; It’s near to the hotspot of young aspirational Malay-Muslim families who have just moved in to the new housing estates nearby so there’ll be plenty of fodder from that human catchment area. It also helps that the average Malay-Muslim palate DOESN’T KNOW ANY BETTER if what they are getting is THE REAL THING or a $10 crack whore disguised in designer brands. Everybody wins when nobody knows any better.”

Note/Disclaimer 2: Please read it with an open mind. Intention is to improve local Halal food quality and taste. WHQ took no responsibility in any of the reviews given from guest bloggers. Vulgarities and profanities in the article will be censored and removed, subject to WHQ discretion.