Skip to content
On the beautiful island of Langkawi

Went for a very early morning swim. Cannot see the sun rise because we are on the wrong side of the island. Saw some tourists jogging on the sandy beaches. Such cold breeze tinkling with loads of fresh air. The saltish sea water is warm but later it gets colder.

Then roam around looking for some “Gerek” breakfast to curb the previous unsatisfactory dinner….

(just few stops away from AB motel) most food stalls are closed. This one was opened for breakfast and they have such wide varieties of food. Waited for my GPS to give out the co-ords but it failed even when I stayed outside for quite some time.

They have roti canai (prata) , nasi kampung, BBQ fish and chicken, lemak ketam (the orangey crabs found in the previous nite bazaar) and loads more…The place is big and clean…

Later we checked out and settle for hotel Langkasuka (3 star) at Kuah town. Got a family room (if u got credit card, its cheaper but if u pay cash, more expensive…abt RM140-RM178)

After that, went back to oriental village for the cable car ride. Early morning, there were some strong winds so they had not started it yet . Luckily, the cable ride was ok in the afternoon but the bridge is not opened because of maintenance.

The view was breath taking…..loss for words.

When we wanted to go back, there were some TV3 staff filming some videos of people riding the cable car.

Head to mosque to do some prayers..

Many clothing stalls (so pack lightly!)

Went to fresh prawns farm (maghrib time) and we can solat there at the surau. It looked like its Chinese owned thus I asked whether its HALAL. Yes it is. I like the wooden huts built for customers to dine in like a “kampung experience” and seat “bersila”. Love the kampung and romantic ambience feeling.

Dr. Mahathir had visited this premise

The menu (sorry had rotate the pics and save but the pics refused to budge, so strain that neck pls..hehee!)

The vegetable fried rice (simple but a delight in every bite!)

Very good..tasted as if u caught them yourself…. 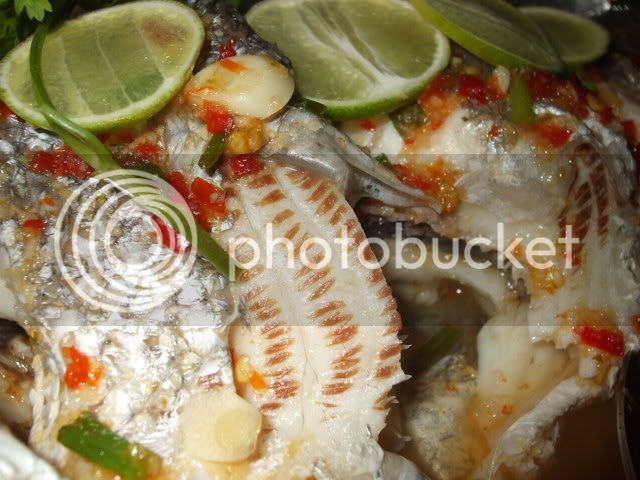 The prawns are so fresh and they declare that “NO antiseptics” are used like in most farms.Everything is yummilicious! Some items are a bit expensive (lobster is about RM200-300 because i think its imported from Canada or something) but some are not so pricey. The food are delicious, so its worthwhile. Spent about RM150 for 6 people.

If u got the time, visit it during the day and u can see the prawns LIVE in the farm. Probably can get a guided tour too! FREE.The surroundings are a bit “hulu” (isolated” Just take note of the GIGANTIC PRAWNS statues.

Tomorrow, we will be heading back….need to rush to Mahsuri’s tomb (heard about her curse on this island?)Well…it was quite a goosebumping experience visiting her tomb..Dont really like the idea of a tomb in the midst of bustling activities/mini village /gamat/herbs store/people practising their musical instruments, caricature corner…Dont really know how to explain it, got to be there to experience it. Difficult to feel the syahdu (sadness)of “keinsafan” .Because we often felt the “silence” at cemeteries but here, it felt “busy” /kecoh. Well, that’s my 2 cents worth…

p.s: Previously tried medium sized images but “tak puas” (not satisfied) so went back to the large size images…