I know the prices for satay is quite steep there. But after years of deserting that area, suddenly we decided to take a stroll there just to keep update on Singapore tourist attractions.

Upon reaching there, I was amazed! The place totally change! I felt like I’m in a costume party or some sort. Each and every restaurant has its own theme. I was in tears (due to much laughter) when I saw a restaurant decorated like a “hospital”. The customers sat on wheel chairs, drink some sort of blue liquid from IV drip. It is indeeed very “out of the box”. I think it’s called the clinic. And one restaurant named MARRAKECH! It was nicely decorated. There was a large swing (like in Indian movie) inside. VEry intensively decorated. But to my dismay, they sell alcoholic drinks…but it was a beautiful sight! sigh..

Passed by SHIRAJ, was told that they sell some mean lamb kebab. They have 2 restaurants. One is non-halal because they have alcoholic drinks and the other is like a kiosk where u can buy the food at the counter (did ask wherther it is HALAL and they said yes, no HALAL-cert though) and sit at the majestic high stools in the open while watching the crowd go by..basking in the ambience.

The funny thing when I was searching for the “Satays”..as I passed by many bars/clubs.., I can hear many whispering and gestures and sly grin pointing at me..indicating that I’m LOST! Cos a “fairing” (what locals called a woman wearing the headress) would not be there…yeah..precisely! I was LOST searching for the satays. It felt like a maze,really!..hehe!

After such futile search, I gave up…maybe need to recce in the afternoon, too dim..perhaps..or they may have moved..

I went to all 4 mini streets and fail to detect any aroma of BBQ satays like I used to. Cannot even find them, where are they?

Saw a large restaurant with the name “KING SATAY”..is this the one? Hmm…

Oh, from this forum discussion, I noted that the old satays are no longer there.King satay is not related to the old satay vendors…sigh..another “satay club” gone…

Reminiscing the past, those good old satay club days… 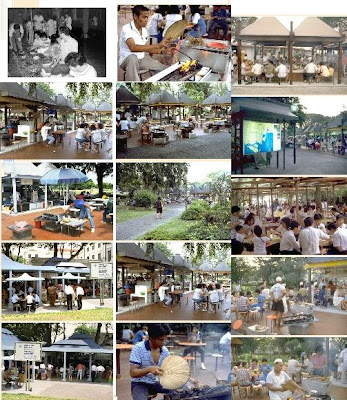 Note: the above thumbnails are for online reference only. U can purchase the actual size photos from National archives online(select a2o search and type “satay club” in the search engine)

Let me compile the list from memory:
1)2 Satay club vendors (or younger generation) at esplanade can be found at Pasir Panjang food centre and DADI
2)REX satay is at changi airport canteen T2(Sunday-no satay)
3)The sembawang satay club (not sure from rex or esplanade) has moved to geylang,in front of city plaza.Can view pics, here.
4)al-hambra satay at beach road (olden days) is at Esplanade glutton’s bay.

1 thought on “Where are the satays in CLARKE QUAY?!!”